Let's start this with a big one.
Welcome to Samobor! SCUMs biggest city so far filled with all sorts of wonders that will bite your face off.

You guys remember when we talked about sounds and when we were recording gun sounds with the military? Well few of them like our mocap studio so we suited them up and went to record some animations.
All rifle movement animations for 3PP have been updated, and now they feel and look much better.
All pistols, Kar98 and shotguns had their firing animations reworked for ADS position.
With time the rest will follow!

What would our island be without our favourite puppets? Thanks to those awesome guys we keep this show running, and for a small thank you, we are spreading them out!
Puppets will be able to spawn indoors now, that includes:

Also, we reworked the spawning system players should encounter more frequently puppets now. The number still is the same: 64.
We also added 3 new specific config options for private servers where you can specify how many puppets spawn in a specific environment category.

The setting "MaxAllowedZombiesInWorld" defines the total number of puppets on the server allowed.

We are always telling people that SCUM is best enjoyed with friends, that's why we upgraded our squad system!
So what did we add:

And here are some general information that you need to know:

The engineering skill is connected to base building and repairing. Higher levels of skill allow you to build stronger bases more eﬃciently.
Skill

Base elements are now sorted into skill levels meaning the higher your skill is the more diﬀerent elements you can build. We have also added some new base elements - four levels of walls and corresponding door frames.

The simplest walls you can build require minimal resources and provide basic protection.

Strong wooden walls that are hard to break and require more resources.

Strongest walls ever require a lot of resources to build and tenacity to break.

The demolition skill is mainly focused on using traps which we added in this patch. Diﬀerent kinds of traps allow you to defend your bases or ambush unsuspecting prisoners.
Traps

With multiple triggers - Can be armed with different kinds of triggers.

With ﬁxed triggers - Are activated by stepping onto them

Triggers
There are several kinds of triggers you can craft and equip your traps with. More will be added in the future.

Reacts to motion in a certain area around the trigger

Reacts to movement trough the laser

With this inventory rework we added more features so you have more flexibility with your inventory.
Rotation

Now you can rotate your items in your inventory. While drag and dropping an item, using the scroll wheel will rotate it. 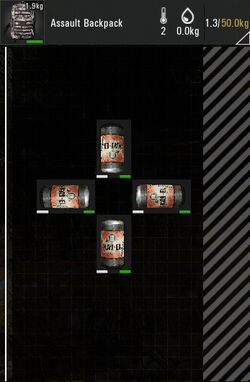 While hovering over some items, you will get additional info on the widget
While hovering over an item, holding left Ctrl will now show the tooltip
If a tooltip has more than one panel, it will show a bar and you can use the scroll wheel to scroll it.
Different item types have different tooltips now (so far, only weapons and food are implemented, with improvements to come)

So we changed a bit the layout. Now the Vicinity tab is in the top middle of your screen and you can drag it down to make it bigger if needed.

The inventory "resolution" has been increased, meaning 1 old slot is now covered by 4x4 slots 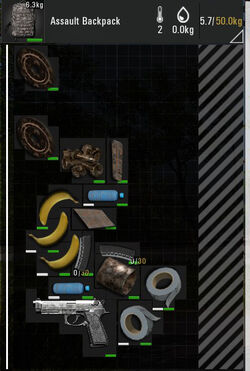 Inventory management, now we have irregular shape icons for items, so you can adjust your inventory with more precision. Or just play shapes fitting between other shapes, whatever you like. 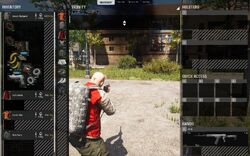 Please keep in mind that bugs and issues can arise in this feature in various forms, the most likely you will encounter are icons that don't really match their new layout.

Now you can finally repair and maintain your items! Well, at least if you have the right repair kit, and this are the repair kits you can find and for what are they used.
Tool Box:

All clothing items besides protective gear.

No more jumping around with 4 bullets in your legs!
So we added the first iteration of limping. And this is how you can find yourself in a limping situation:

Health lower than 10%
If legs have a bleeding injury, and that can happen in 2 ways

Getting shot in the legs
Jumping from a big height

We did a little rework with our lightning regarding how it behaves.
(No worries, it won't impact performance).
Also with that we improved our snow this year so snowball fights and sledding down the dam is in a bigger Christmas spirit. 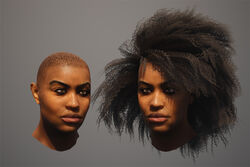 == PvE/Harcore Servers For now there will be 1 PvE and 1 Hardcore server in Europe and US East.
Please leave as feedback regarding those so we know if we need to add more or change it in any way.

Because it was not scary enough.

This will list all the squads on the server with their squad id.

This will list the members of the squad, their steam id, and their rank.