Hello everyone happy Thursday! We have another update for you and this one is a big one. So prepare your lockpicks and sharpen your screwdrives, let's dive into it! No video update from us for this one but we have shared the info with some of the content creators you may know. This is experimental as we wanted to provide some content to people that supported us through the years and gave exposure to the game. It also lightens the load from our dev team so we have more manpower on the patch itself. You can find them here: 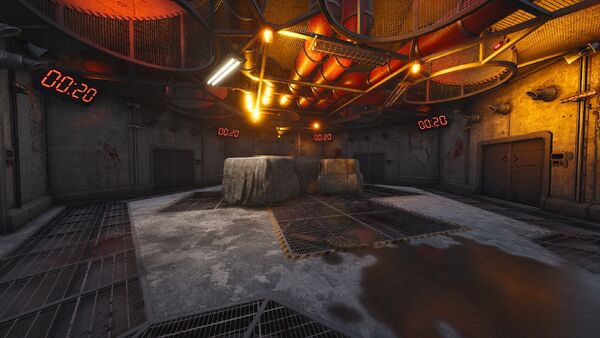 Introducing the, queue the dramatic drumroll, the Killbox! A new area added to bunkers all around the map that will surely make you fight in the forums how it should work.

This new area works pretty different to the rest of the high loot areas and will require some work to be put into it. So how does it work?

First off you will need to find a brand new item. Keycard. Keycards can be found all over the map, but there is a catch. All keycards only open a certain bunker and can only be used once. To know which bunker the keycard opens look into the keycards description. 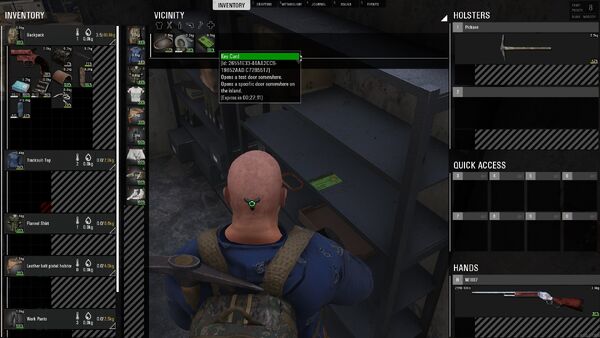 Once you managed to make your way to that bunker and unlocking the door you will enter the Killbox and will be greeted by a friendly voice. Once the Killbox door is opened, the 15 minute timer is started.

When the timer hits 2 minutes, the Killbox starts to fill with deadly poisonous gas, which you can withstand if you have the brand new gas mask.
After the timer runs out lasers activate and the Killbox is purged of all living things inside. 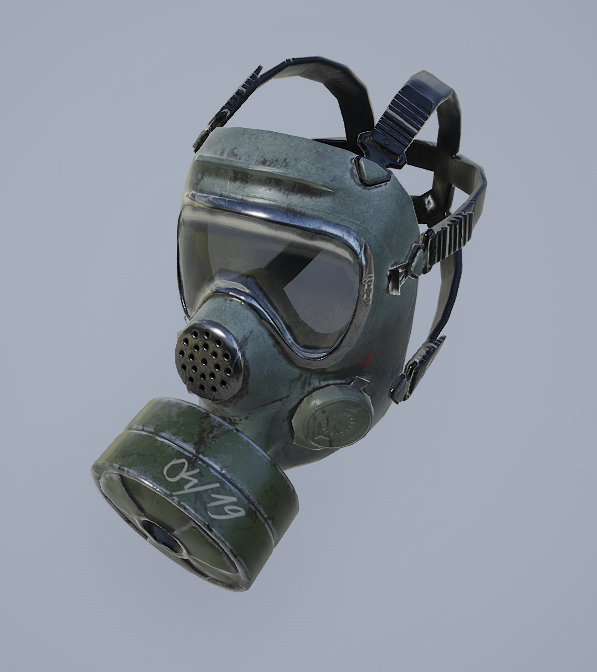 "Sounds horrible why would I go in there then?" you ask.

Well my curiosity killed the cat friend, the rooms are filled with high stakes high rewards military loot, guns and ammo. These are going to be even more important since all weapon lockers across the map are now locked and need to be lockpicked. This will not only decrease the amount of military loot available all around, but also increase the survival segment of the game. Chambers of the killbox are also locked, but not with actual locks but magnetic ones. They will need to be opened by the bomb defusal minigame. Careful tho failing to unlock the door means triggering the punishment event, but I don't want to spoil the surprise.

Once inside the chamber you will find locked cabinets with that sweet sweet loot. 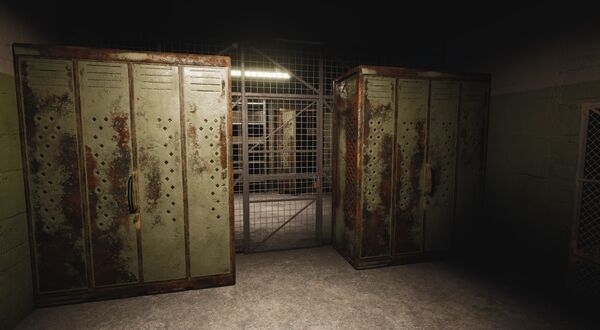 There are several types of cabinets and they go like this:

Wait did I just read C4? Yes, yes you did. C4 is now live and armed on the island. 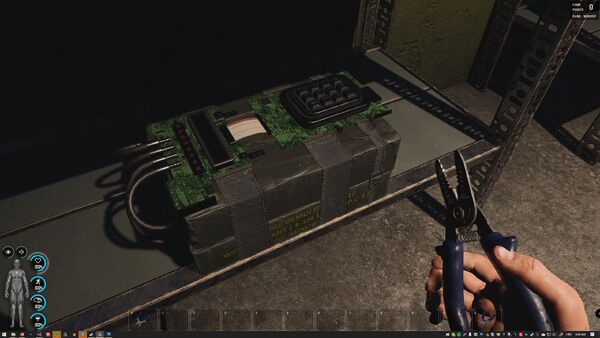 Now you may ask, why would I need C4. Well simple answer. Base raiding. C4 is the ultimate breaching tool for bases on the island. Set the C4 by the walls of that pesky neighbors that never returned that lawnmower you loaned to them 3 months ago, set it to blow, get back to a safe distance, and watch their walls disappear. What we are saying is C4 does massive damage to all base building elements.

Oh and btw we realise that we have put a bit more emphasis on the lockpicking currently so we added a smaller more common screwdriver. It has 5 uses but it still works fine. 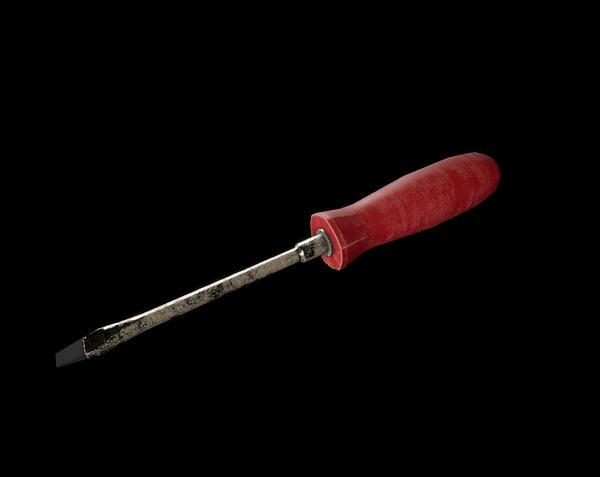 We touched upon base raiding but what about base building? Some major news on that front.

We have completely revamped the way BB walls work and are made.

The old palisades were great and all but there were a lot of features we wanted to do with them that we could not, plus they kind of stuck out and were not that original feeling we wanted with the game. So introducing new walls to Base buildings. 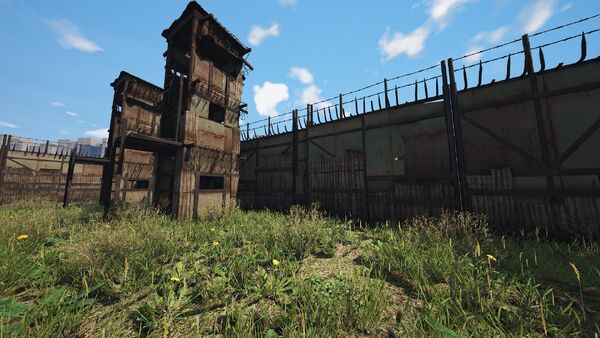 These walls make more sense in the abandoned island atmosphere and have a couple of nifty little features as well!

Take note that the arrow points to the outside part of the wall.

To start off we have 3 different walls:

But here is the catch, these are not 3 seperate walls. Well they are and are not at the same time.

Base building walls are now upgradeable. This means if you want to add more protection you don't have to build another set anymore. Instead simply hold F on the walls and press upgrade, a new blueprint will pop which you can fill and BAM a new wall! 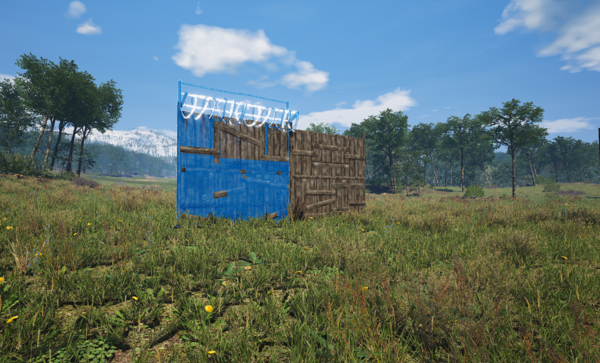 With the wall changes and the new look you no longer have pillars, so now there are wall blocks. There are 6 different wall sizes and each of them have different HP and material requirements.

If you build on a steep surface, the walls will tile themselves so you will get smaller wall chunks. When you want to upgrade the walls, you need to do it chunk by chunk.

Do keep in mind you cannot immediately build Metal walls, you need to start from basic and upgrade up!

Not only walls received this upgrade but, towers, doors and doorframes as well.

You might be concerned about old bases and what happens to them. Don't worry they are still there and your stuff is protected. Old base building elements are removed as a crafting option and will degrade more and more over time to give you time to replace with new ones and keep your hermit holes safe.

You can now craft your own workbench. It's functionality is similar to drill presses and lathe machines so you can craft ammo with it and other things that require it. But there is a trade off. All things crafted on it have only 50% durability. Which you already know can lead to weapon jamming and other nasty things 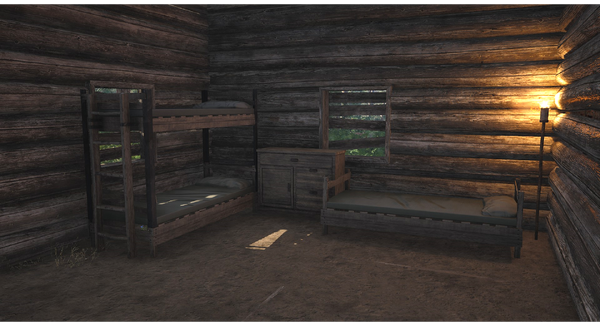 Let's face it, you have characters that can make constructions that can enter the list of national wonders. Yet you still sleep in that old raggedy improvised bed. Well no more as bunk beds are now available. Not only will they bring great comfort to your character they also function as the respawn point like the other does as well.

As nights in SCUM get really dark and constructing a base at that time could be a real hassle, we added 2 new light sources. 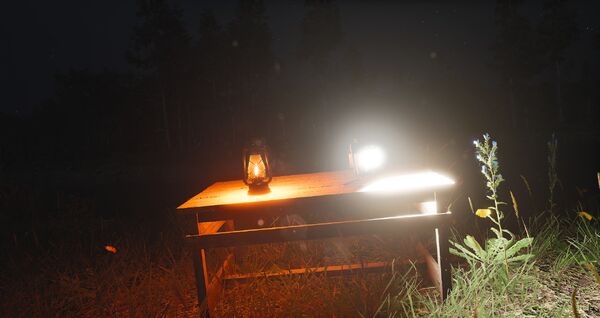 The Lantern can be fueled with gas, while the Portable Work Light can be charged with batteries.

Along with the normal batteries we have, we also made the smartphone battery rechargeable. All you need is a car battery and car wires and you're ready to go. 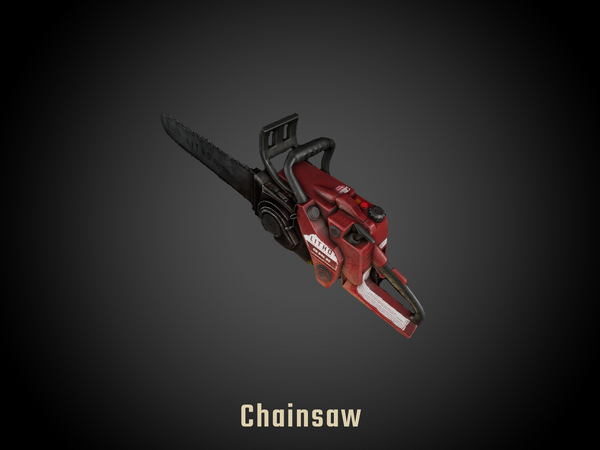 Well we got new base building elements and you'll need more materials to build them, especially wood. And yes you could use an axe like before to chop it down but we know you. You want power. You want strength. You want... a chainsaw! Well here you go my little lumberjacks:

the chainsaw, a saw with a chain. This tool is not here purely for the fun of it tho. Ok maybe alittle bit for the fun of it but it is quite useful. So yes you can cut everything with it, with it's own special sets of animations as well!

So what's the real kicker? Well with the chainsaw you get more materials for each cut than you would get with the axe. So if you want to build those real big walls you have less trips to the forest. It also cuts way faster than the axe does. I mean it is a chainsaw after all.

There is a drawback tho, you will need fuel. Yes the chainsaw does indeed use fuel in order to operate. To fill it you will need 2 things, gas canister and gas itself. Once you have it simply hold F on the saw or right click it and refuel the chainsaw. Also take note that the chainsaw will not cut anything if not fueled and switched on.

So how do you turn it on? Well the controls are pretty much the same as weapons so you don't have learn that much:

But I know what you want to know the most, you psychos. Can I chop people with it. Well yes yes and soon.

Yes you can cut at people as a melee weapon with it and yes you can chop bodies with it. Soon tho means that special melee attacks with the chainsaw are going to be implemented in the future.

Well you already saw a lot of material on this one, we did have fun with it on Twitter. But here they are in all their glory! Wheelbarrows! 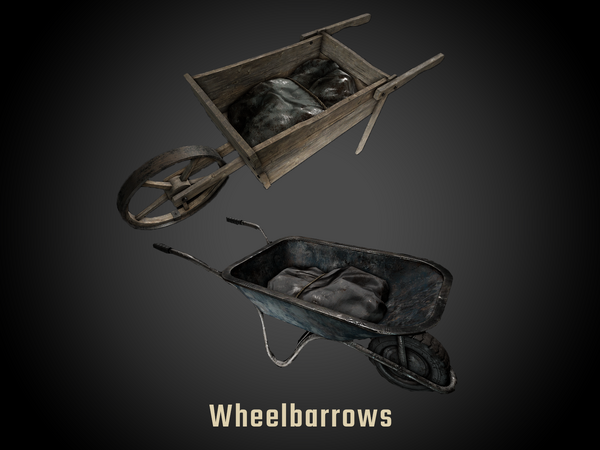 There are 2 types of wheelbarrows:

So there are 2 main differences between the 2.

Now HP is important because not only do wheelbarrows take damage when you hit or shoot them, they are also susceptible to fall damage and durability drops slowly when you drive them around. So make sure you have a toolbox handy so you can make those emergency repairs.

And yes as seen live on TV you can shoot from the wheelbarrows:

So important thing to note when using the wheel barrows is that part of their weight carries over to the player and encumbers the weight load on the player. So let's recap some old stuff here.

There are 3 types of actions in the game: Easy, demanding and very demanding. Examples would be walking, jogging and running in the same order. Everything that a player does in the game is considered an action. This is important when talking about weight load because each type of action has its own separate weight load threshold. For an example threshold for a character build could be 40 kilo walking, 20kilos jogging and 15 kilos sprinting. Now when the weight load of the player goes over the threshold it starts to increasingly drain the players stamina, calories, water and DEX stat overall. Dexterity because it is the stat that determines the speed of action execution.

We also have some new items for you fashionistas and RP players, check them out: 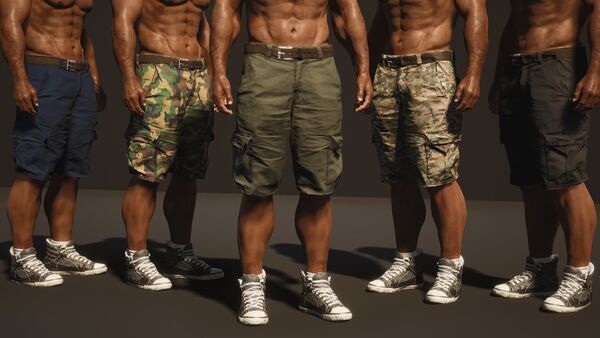 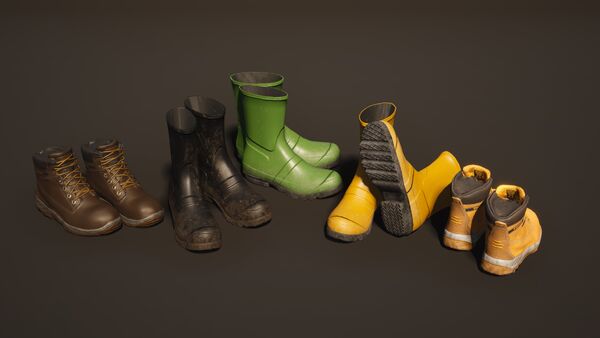 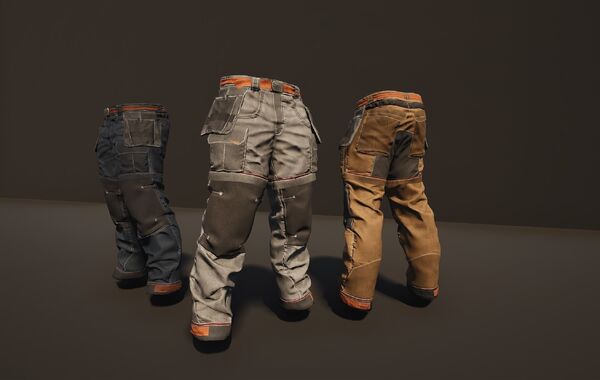 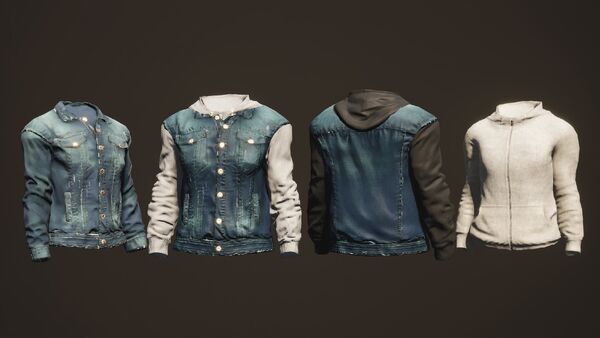 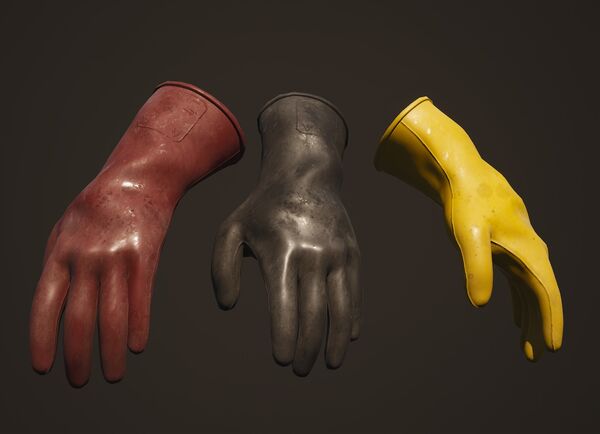 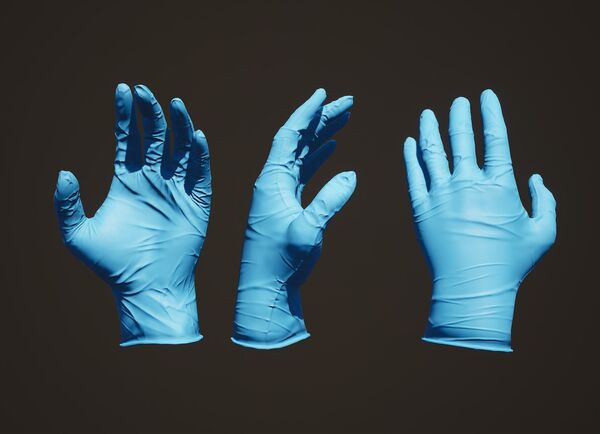 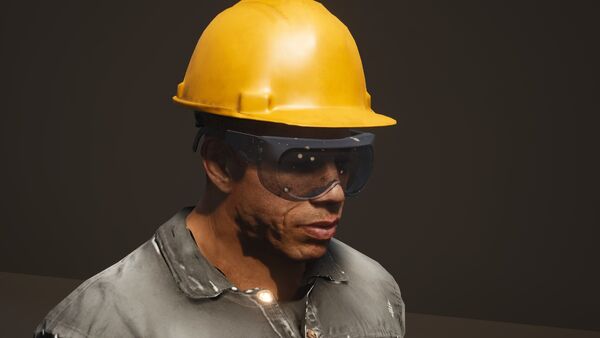 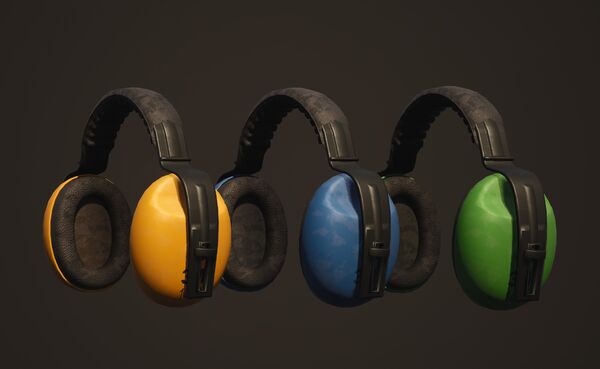