Start a Wiki
The Batteries was a Santa Cruz band (1979-1985 & 1989-1991) originally involving Tony Canipe (rhythm guitar/vocals/keyboards), Mark "Curly" Grove (bass/vocals), John McCullough (lead guitar/vocals) and Steve Velasquez (drums). Started as a garage band project among friends playing covers, The Batteries sharpened their sound by developing Canipe's songs and replacing rhythm guitarist Fred Civian with McCullough on lead guitar. They were the first local band ever featured on a Good Times cover (May 21, 1981). Unfortunately, the band had to cancel some gigs in June 1981 after Velasquez crashed his car into a telephone pole. He received 60 stitches.

With a change in mind, and striving for a more driven & dynamic sound, in October of 1981, Jack Hammer (formerly of The Secrets) took over as drummer, and Ramone Graydon was added on keyboards. The band moved quickly from not only opening shows for major touring acts such as The Ramones, X, Missing Persons, but headlining their own mostly sold out shows. They appeared numerous times at the Catalyst, Santa Cruz Civic Auditorium, and the Coconut Grove Ballroom at the Boardwalk. Their first album was recorded at the Catalyst, produced by Ken Kraft of Snail, and released in 1982. It was thought the track "Can't Stand It" would be the break out song but instead it was the song "Spanish Fly" that FM radio picked up on and played in pockets of the east coast and southern U.S. and parts of western europe. Steve Deutch or Sam Phipps would sometimes sit in with them on saxophone. They were voted Best Band in the 1982 Good Times Best of Santa Cruz Readers Poll Awards.

In 1984 they traveled to Berkeley's Fantasy Records to work with producer Bill Spooner, guitarist for the Tubes, and recorded the six song EP, Think Of Somebody. Pressed on clear vinyl, the record contained the song "Spoiled Americans" which became a video [ https://www.youtube.com/watch?v=hDu0zntmCYU ] that landed on MTV's Basement Tapes. The video finished in the top five and was broadcast nationwide. The song "Waiting on Angel" was released as a 45, garnering attention and air play.

1985 saw the departure of keyboardist Ramone Graydon and the addition of Michael Griggs in his stead as work began on the follow up to the "Think of Somebody " EP with Vince Welnick of the Tubes at the helm producing. The recordings were subsequently taken to New York's Record Factory for mixing and further production work. In addition, renowned DJ David Morales had a hand in some of the remixes that came out of these sessions. However, not long after returning from New York, with arguably some of there best and most polished work to date, and while several major label deals were tantalizingly close, frustration and internal strife proved to be too much, and they disbanded in 1985.

In 1989 the '84 line up regrouped for a few live shows but Ramone was not up to continuing so Tony, Jack, Mark,and Johnny soldered on as four piece writing new material and recording. Mark bowed out at the end of 1990.

As 1991 began, former band roadie Mario Garcia took over on bass and Chris Rieger , formerly of Eddie & the Tide, on keyboards. They settled in to record and rehearse at there own studio, the Abattoir. They also played numerous live shows during this period, showcasing the new songs with a smattering of the old. Unfortunately, with legal difficulties surrounding the drummer Jack Hammer, and other factors, the band dissolved for good in 1992. 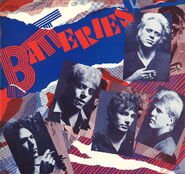 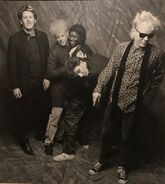