From Scum Wiki
Jump to: navigation, search
This article is a stub. You can help Scum Wiki by expanding it.

The Sentry is a large bipedal mechanoid equipped with a heavy machine gun, and guards military bases. They are found at military bases around the island, typically ones that have guns and other military gear available for looting if you can avoid their sight.

Sentries will follow a patrol path around their location, deviating only to follow intruders if space allows them to do so. If they can not see the intruder for a few seconds, they will return to their patrol path.

When sighting a player, their front lights will turn red and they will start firing immediately. They have good vision and a very high range, and can often only be hidden from by breaking line of sight or with a very high stealth skill. 1-2 bullets from a sentry is enough to kill most players, but they usually take a second to actually hit once they start firing, so there is a very brief window to get behind cover if you are sighted. 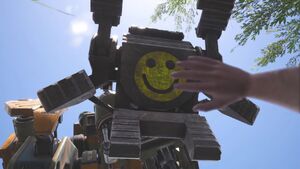 Mr.Smiles's foot, seen in the Welcome to SCUM Island trailer.

Mr.Smiles is a unique sentry located at ?. It has a smiley face painted on the bottom of its foot.

Currently, the Sentries have an Unconfirmed amount of health, making it hard to understand how to defeat them. They are extremely strong however, and soak bullets from any round like a sponge. Currently, the best way theorized by the community is to use a M82A1, or the Barrett .50 BMG caliber High Powered Anti-Material rifle. The amount of .50 BMG rounds required to take a Sentry down is currently disputed as no known sources have actively taken one down, however it is estimated a good 15-20 rounds of this caliber is required to retire a Sentry. The .50 BMG round is extremely hard to find though, only being found in Bunkers at a low probability, and more likely to be found in the Killbox, a room found at the end of Bunkers renowned as the end-game loot spot in SCUM and is very difficult to successfully loot. Another way of defeating these Sentries, while untested and a less popular opinion than the .50 Cal Rifle, is the RPK-74 chambered in 7.62x39mm Bullet with a 75-rnd drum magazine attached, possibly using 2 or 3 full mags maybe using a total of 150-225 7.62 rounds. looted rounds are seen as better or more efficient than crafted rounds, as AP (Armor Piercing) rounds can be found and are generally extremely strong for any caliber they are in, of which the 7.62 mm round has one.