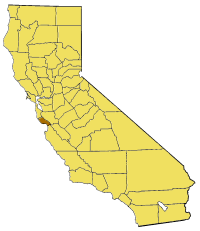 Santa Cruz County is a county located on the Pacific coast of California, just south of the San Francisco Bay Area. Its southern coast forms the north coast of Monterey Bay. As of 2000 its population is 255,602. The county seat is Santa Cruz.

Santa Cruz County was one of the original counties of California, created in 1850 at the time of statehood.

In the original act, the county was given the name of Branciforte, after the Spanish pueblo founded there in 1797. Less than two months later, the name was changed to Santa Cruz. Mission Santa Cruz, established in 1791 and completed in 1794, was destroyed by earthquake in 1857, but a smaller-scale replica was erected in 1931. Santa Cruz signifies "holy cross."

Lying in a narrow strip, about ten miles wide, between the coast and the crest of the Santa Cruz Mountains, a mountainous terrain typifies most of the county, with some coastal lowlands. Most of the coastline is flanked by cliffs.

Retrieved from "https://scum.fandom.com/wiki/Santa_Cruz_County,_California?oldid=4679"
Community content is available under CC-BY-SA unless otherwise noted.