Santa Cruz is the county seat of Santa Cruz County, California, United States. As of the 2000 census, the city had a total population of 54,593. It is on the Northern edge of the Monterey Bay, about 60 miles (100 km) (a 72 mile drive) south of San Francisco.

The area was first settled by Ohlone Indians, Native American hunter-gatherers. Santa Cruz was colonized in the mid-1700s by the Spanish, who established both a mission (Mission Santa Cruz) and a secular settlement named Branciforte. The town was named, as many of the early Spanish settlements were, for the Catholic feast day on which it was founded. The Ohlones were concentrated by the Spanish into the mission and suffered a rapid decline due to diseases and overwork.

Santa Cruz was settled by Americans in the 19th century. Immigrants from Scotland, Italy, China and Portugal also added distinctive contributions to the area's culture. In the 19th century forestry and commercial fishing were primary industries, as well as dairy farming and leather production.

Santa Cruz is home to the University of California, Santa Cruz, which was built starting in the 1960s as an alternative campus. UCSC was long known for its lack of letter grades and organized sports teams, although this has been changing in recent years, with letter grades being required in addition to Narrative Evaluations provided by the instructor. Their mascot is the banana slug.

Santa Cruz is also well-known for surfing, and is the home of O'Neill Wetsuits and Santa Cruz Surfboards (as well as Santa Cruz Skateboards). The Santa Cruz Beach Boardwalk is California’s oldest amusement park and a designated State Historic Landmark.

Santa Cruz is also notable for the extensive damage it suffered during the 1989 Loma Prieta earthquake, which leveled the mostly unreinforced-brick downtown, killing five people. The downtown area, the Pacific Garden Mall, has been rebuilt almost from scratch, although a few weed-covered vacant lots remain. This same area is also a gathering place for Santa Cruz's population of young street people, along with numerous street entertainers. Another characteristic of Santa Cruz is the unusually high number of old Volkswagen Beetles, Squarebacks, and Microbuses seen parked on the streets.

The principal industries of Santa Cruz are agriculture, tourism, education (UCSC) and high technology. Santa Cruz is a center of the organic agriculture movement, and many specialty products such as artichokes, grown in the Castroville area. Tourist attractions include the classic Santa Cruz Boardwalk on the beach, the redwood forests, and unspoiled Monterey Bay, which has been protected as a marine sanctuary. The best known local high technology company has been The Santa Cruz Operation (SCO).

As a center of liberal activism, Santa Cruz became one of the first cities in California to test the state's medical marijuana laws in court after the arrest of several medical marijuana proponents by the DEA. The case was ruled in favor of the growers, and Santa Cruz has continued to be a haven for medical and recreational pot smokers.

A pirate radio station, Free Radio Santa Cruz, has been in operation there for a decade.

The climate is Mediterranean, with mild summers due to coastal fog. Winters tend to be rainy, although periodic droughts have occurred in recent years.

Shakespeare Santa Cruz annually has a summer festival at UC Santa Cruz. The festival typically does two Shakespeare plays and one other play every summer, many of which are performed in a unique outdoor space among the redwoods.

Santa Cruz is also home to the Cabrillo Music Festival.

In the early 1970s, Santa Cruz was referred to as "The Murder Capital of the World" because there were two active serial killers and one mass murderer in town. These were Ed Kemper, Herbert Mullin, and John Linley Frazier respectively. 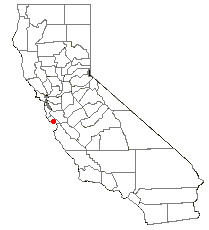 Other Points of interest Edit

Retrieved from "https://scum.fandom.com/wiki/Santa_Cruz?oldid=4690"
Community content is available under CC-BY-SA unless otherwise noted.